Currency - All prices are in AUD

Currency - All prices are in AUD

Guy Harvey is a unique blend of artist, scientist, diver, angler, conservationist and explorer, fiercely devoted to his family and his love of the sea. Growing up in Jamaica, Guy spent many hours fishing and diving with his father along the Island's south coast. He was obsessed with the creatures of the sea and began drawing pictures of the many different fish he observed.Guy’s artwork can be found in art exhibits, stores, galleries, restaurants and at fishing tournaments. He makes appearances at store openings as well as public appearances for a variety of environmental causes. 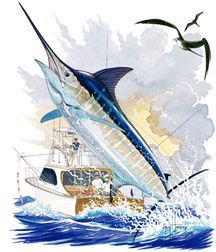 Born in Lippspringe, Germany on September 16, 1955 while his father was serving as a Gunnery Officer in the British Army, Guy is a 10th generation Jamaican of English heritage as his family immigrated to Jamaica in 1664. From his early inspirations, Guy's natural gift to recreate marine life has propelled him from Professor of Marine Biology to a Wildlife Artist and Photographer. Guy initially opted for a scientific education, earning high honors in Marine Biology at Aberdeen University in Scotland in 1977. He continued his formal training at the University of West Indies, where he obtained a Doctorate in Fisheries Management.

In 1985, he depicted Ernest Hemingway's famous fishing story "The Old Man & the Sea" through a series of 44 original pen and ink drawings and displayed them at an exhibition in Jamaica. Based on the positive response he received at the show, Guy began painting full time and by 1988 was providing custom artwork for use on a variety of products. Guy began to travel the world to gain more knowledge of the habits and activities of marine wildlife. He became an avid scuba diver and skilled underwater photographer. 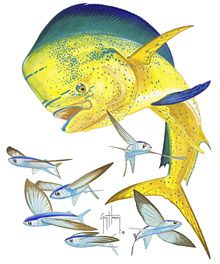 He pioneered a technique of diving and photographing free-swimming billfish. His personal observations made during these diving expeditions have better enabled him to capture the detail in his paintings that contributes to the popularity of his work.

A passion for the beauty and wonder of the underwater world has driven Dr. Guy Harvey to be a leading conservationist and advocate for the protection of our environment. Guy dedicates much of his talent, time and resources to programs that protect our oceans, fish population and reef systems. The Guy Harvey Research Institute at Nova Southeastern University and The Guy Harvey Ocean Foundation have taken on a leadership role in providing the scientific information necessary to understand and protect the world’s fish resources and biodiversity from continued decline.

Founded by Guy Harvey, the Guy Harvey Ocean Foundation is an organization of philanthropists, conservationists, scientists, and educators focused on developing sensible strategies for promoting the conservation of our oceans and nurturing the next generation of marine scientists and guardians of our seas.

A marine biologist himself, Guy Harvey has been personally involved with marine research since he was a faculty member at the University of the West Indies. His personal knowledge and hands-on field work with foundation-funded scientists ensure that all research projects have maximum impact on the body of marine science.

Through the support of the Foundation’s visionary friends, leading scientists will develop new strategies for sensible fisheries management, encouraging the cooperation of commercial and recreational fishers, and educators will create novel instructional programs to stimulate future scientists and new stewards of the marine environment.

Since 1999, Guy Harvey has funded research that has led to a broad understanding of the genetics of fish populations, which helps law enforcement officials curtail illegal trafficking of endangered species. Other work has discovered new species in new habitats and clues for better fisheries management. The Guy Harvey Ocean Foundation will help ensure that future generations will enjoy and benefit from a naturally balanced ocean ecosystem where fish and other marine wildlife flourish.